PURE ROCK! Four talented musicians have been playing music together since middle school and we are happy to introduce you to their amazing music band – “Always Tyrants ”

Always Tyrants: Matt: Alex and I are childhood best friends and growing up his house was a place where I learned a lot about music. Alex’s mom is a musician and growing up Alex played drums. I always wanted to be a singer in a band so him and I started playing music together in middle school. By the time I was in high school I had formed a friendship with Alec in the restaurant he and I worked at, and one day he made a comment about how he played guitar, so I was like “Oh cool, I’ll bring my guitar over sometime and we can jam.” So eventually I show up to his parents’ house expecting to show him how it’s done, and this dude who is so soft spoken just starts hammering crazy riffs that just blew me away. A couple years went by and we were all out of high school I knew I needed to form a band and I only wanted it to be with people I could trust, so Alex was the first one I recruited, then I called up Alec one day while he was working at that same restaurant and basically just said “Hey, would you like to be in a band with me?”

Always Tyrants: Alec: In a general sense Matt is considered the leader. He has a stronghold on how the marketing/busines side of a should operate. When it comes to song writing we have a very artistic/collaborative approach. Although we mainly stick to our parts, any good ideas for lyrics, guitar, bass, or drum part are put into the final product. We have a very democratic approach when it comes to band matters, that makes it easy to stay focused. It doesn’t hurt that we agree most of the time anyway. 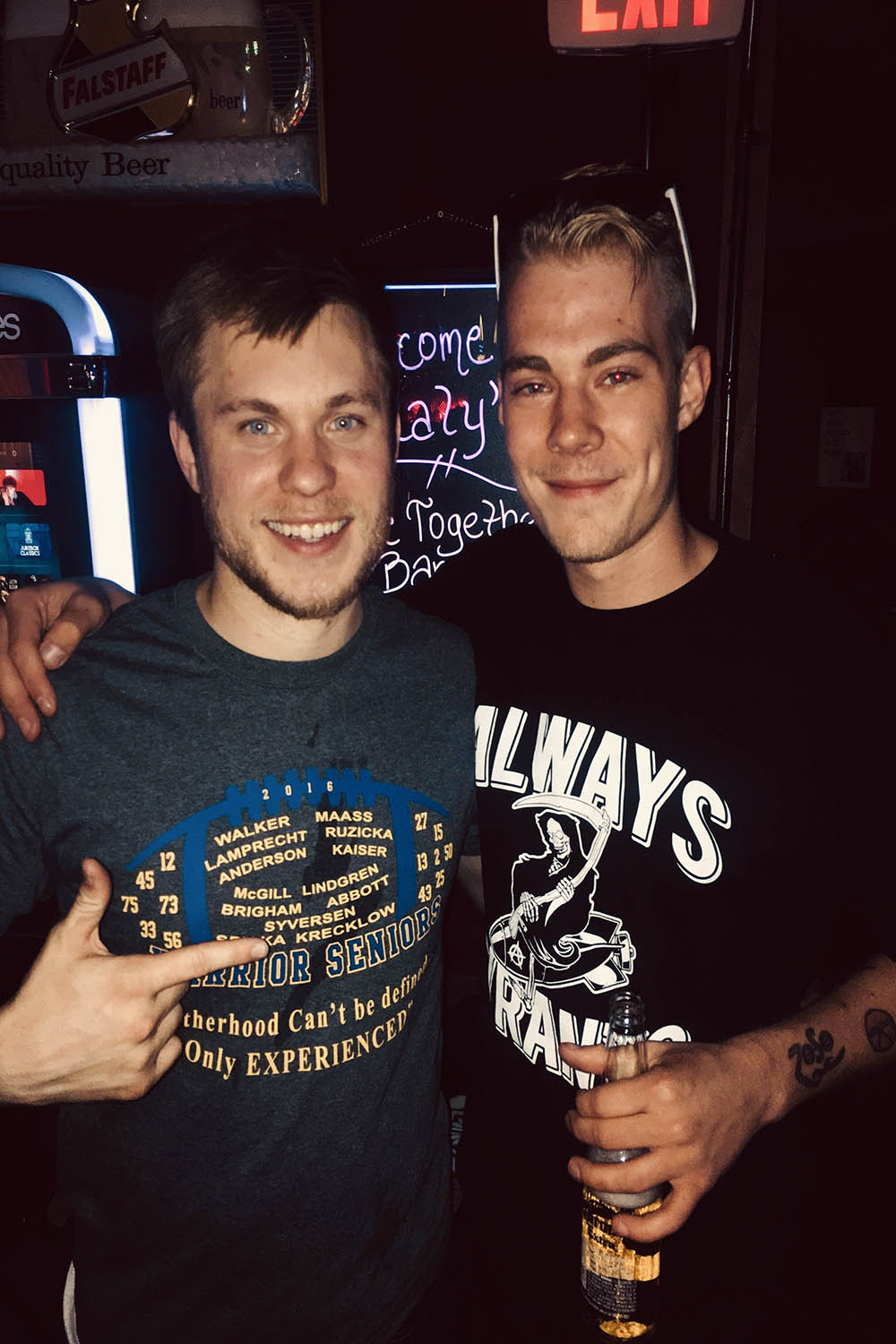 Always Tyrants: Matt: I mean honestly no we don’t have a collective favorite. My favorite is Appetite for Destruction, and I’m sure if you asked Alex he’d say either some Rise Against or Beatles album.
Alec: Yeah mine is Zeppelin II and Zac’s is Van Halen’s Women and Children First.

Always Tyrants: Matt: Absolutely we have hidden messages and meanings in our songs. It’s literally our favorite thing to do when writing a song, like “How can we make people think this song is about something it’s not even about?”. Having a deeper meaning behind a simple lyric is where I get the most pleasure as a songwriter. Although it doesn’t completely cover what I mean, one instance with this album is that most people who have heard our song Humble Beginnings is just about a dude showing off to a chick and trying to pick her up or something, when in it’s actually about the masks we wear in society.
Alec: Right, like we have songs that aren’t on this album that we wrote as a band and made a promise to never tell what the song is really about.
Matt: Shhhhhh.

Always Tyrants: Alec: Be friends before you become bandmates.
Matt: 100%. Also know what you’re getting into and commit to the journey, and each other.

Always Tyrants: Matt: People and books and my experience with each. I feel things deeply and I will dwell on a situation until I can make it poetic.

Always Tyrants: Matt: Our debut album “These Days” will be released on all platforms February 26th.

Always Tyrants: Matt: Oh we would have a lot set up if it wasn’t for Covid. It seems like things are starting to open up more so hopefully we will be hitting the stage soon!

Always Tyrants: Matt: Our latest release was our lead single These Days. It’s really a song about pursuing your purpose and not giving up, no matter how overwhelmed you feel, or what other people are telling you. I wrote the lyrics during a time period where I was really struggling, like deeply struggling with what I was doing with my life. I broke free from that period in part thanks to listening to a lot of positive people like Gary Vaynerchuk, Rick Barker, and Jocko Willink. But the dude that I really latched onto and identified with was bowhunting-athlete-superstar Cam Hanes. Here is a dude who is doing all this cool stuff, works his ass off like no one I’ve ever seen, and then I found out that he has a full time job! When I heard that I was like “WHAT!?” here I am thinking that I’m limited because I have a day job, then I find out this guy is doing wayyyyy more than I am, and he has a full time job too! Like one time in a interview he said something like “I have a 9-5 too bitch”, it reallllly inspired me to keep going hard and his motto “Keep Hammering” became the chorus to that song because that was the chorus to my life at that time.
As far as the recording goes, we recorded at a practice space in Sioux City, Iowa. Our producer/jack of all trades is Dylon Lower from the metal band Morthereon. 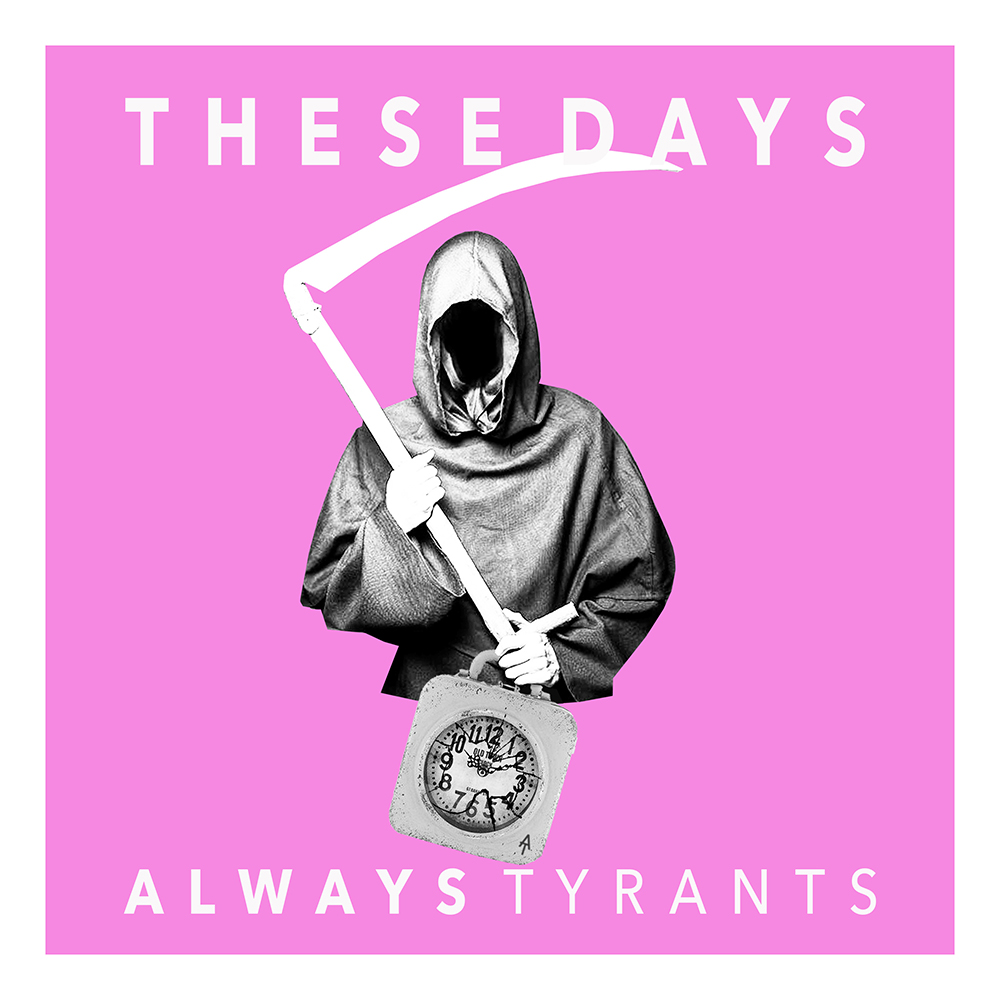 Always Tyrants: Matt: Well we knew we were going to all be in a band when I wrangled everyone up and was like “Okay will you be in this band with me?” It literally felt like asking a significant other to commit to a relationship. We were already all friends so from there we never looked back. As far as the name goes it’s a mix of thinking about how because of human nature there will always be tyrants, I wanted to take over the music industry like a tyrant, but also let’s not forget the most important and driving factor…I just thought it sounded cool.

Always Tyrants: Matt: Yeah once again, we are all legitimately friends. We went through a few month period after releasing our first ever single You’re the Reason where when we would all hang out we’d just drink beer and watch movies and crack each other up. Those are honestly some of my favorite times as a band, and we weren’t even playing music, and I LOVE playing music.

Always Tyrants: Alec: That’s a tough decision. I’d have to say I’m the happiest when we are in the process of writing a new song. Nothing beats the creative energy of a new song coming to life.
Matt: 100% agree.

Always Tyrants: Matt: I want people to remember that hard work is good, that it’s okay to dream big, but also like what my dad always told me growing up: Don’t be afraid of failure. Do you have any idea how hard of a time I’ve received my entire life for dreaming big or saying I want to be in a band? This whole album is about struggling to “make it” whatever “making it” means to you, and how that process can be so incredibly painful as well. Diamonds are made under pressure, and gold is purified through fire. If you want to do big things, it’s going to come with growing pains. But it’s okay, and it’s what will develop the real you.

Always Tyrants: Matt: The most recent story that makes me laugh is I found out no one in the band watched me record the solo scenes of me singing on the roof for our video for These Days because they thought I was going to fall off the roof of the building. Like Alex legitimately said “I didn’t want to watch my best friend fall to his death.”

Always Tyrants: Matt: First of all, if you’re going through a hard time, keep pushing, keep hammering, if you take the time to learn whatever the lesson is, your trials will make you a stronger person. Second, if you feel a conviction in your soul moving you to do something, listen to it. And third, and not to take this to a totally different track but please follow us on social media, please stream our music, and please add us to your playlist. Last but not least, thank you for all of your support.