We are presenting CROSSING BELT, an amazing music band from Turin, Italy. Their idea of rock is simple and direct – it should be fun but also create emotions!

[Blaster] How did the band come together?

Crossing Belt: Hi guys and thank you for having us! Fun fact, the band started with a joke – let me explain – in the summer of 2010 the lead vocalist (Fabio) and the rhythm guitarist (Daniele) were invited to the latter’s cousin’s wedding and they were asked to jam together to entertain the attendees. It went surprisingly well! So that started the idea of getting together, also with Daniele’s friend (bass player Stefano) and playing music. We only needed someone on the sticks to complete the lineup, so we called up our first drummer (Matteo). Our first show together was as special guests on a local talent show, covering “Watch Over You” by Alter Bridge. We all enjoyed it very much, as the audience did. The rest, as they say, is history.

Crossing Belt: A group of bros before fellow musicians, who love what they do and want to reach as many people as possible while doing it.

[Blaster] As a band, is there one person who is the leader?

Crossing Belt: Well, most of our ideas start with a guitar riff from Daniele, then we try different approaches in the rehearsal studio (also with lead guitarist Francesco and drummer Piero) until the result pleases us all. We like to think it’s a very democratic approach to music. Then we sit together in a more relaxed environment to write down lyrics, based upon personal experiences and the context that the song style leads us to.

Crossing Belt: If we had to name one, out of all our favorite albums, it would be “One Day Remains” by Alter Bridge. This kind of music inspired us since our inception and still does to this day, because it represents very well who we are and what we want to express through our music.

Crossing Belt: We try very hard to convey concepts to make them accessible to everyone, but at the same time not make them look too obvious. Themes of personal redemption and search for freedom – whatever it may mean – are at the core of our thought process involved in making our music. Sometimes it’s hidden, sometimes less. 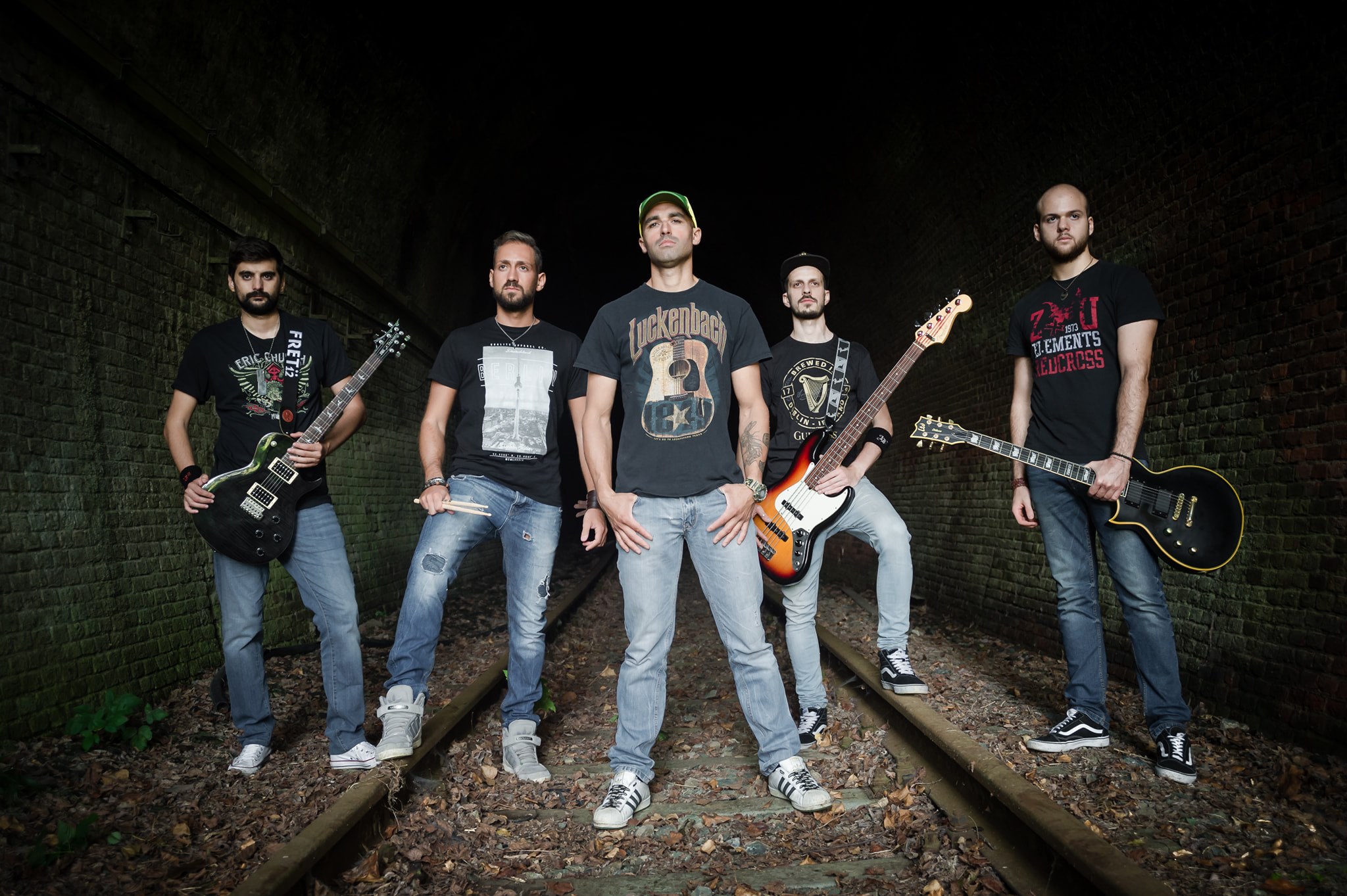 Crossing Belt: No secrets here – just be yourself and love what you do. We are friends (some of us for longer than we’ve been in the band) in the first place, so that helps in keeping the band together even when things aren’t so great. I guess that’s the “secret”.

Crossing Belt: This is, I think, what makes our band special. Each and every member has its own musical background so it always keeps the “mix” fresh with different ideas. The tricky part is to combine them all together but so far we’ve managed to do that pretty well.

[Blaster] Any plans on new music? When can we expect a new album or EP?

Crossing Belt: We’ve just released our latest effort – the 6-song EP “Break The Chains” – on March 18th, 2020. It contains 5 unreleased songs and a modern-day cover of Lynyrd Skynyrd’s “Simple Man”. Writing and recording it has been an equally painful yet rewarding experience, because we explored new musical territories and honed our skills.
As for new music, stay tuned – we are constantly writing new ideas!

Crossing Belt: We did – we had some gigs planned to celebrate the release of the album in March, but unfortunately everything went adrift because of the COVID-19 situation. But don’t worry, as soon as it will be possible to perform in front of a crowd again, we’ll be there.

Crossing Belt: Our latest single “Coming Home” is an uplifting power ballad and was inspired by the longing for something good in the life of all of us. We thought “home” doesn’t necessarily refer to a physical place but also a state of mind where you can reconnect to the good times and experiences. We think many people can relate to it and that’s why we chose it as the lead single for “Break The Chains”.

Crossing Belt: Releasing our EP and doing anything it takes to let more people know our music and what we have to say. 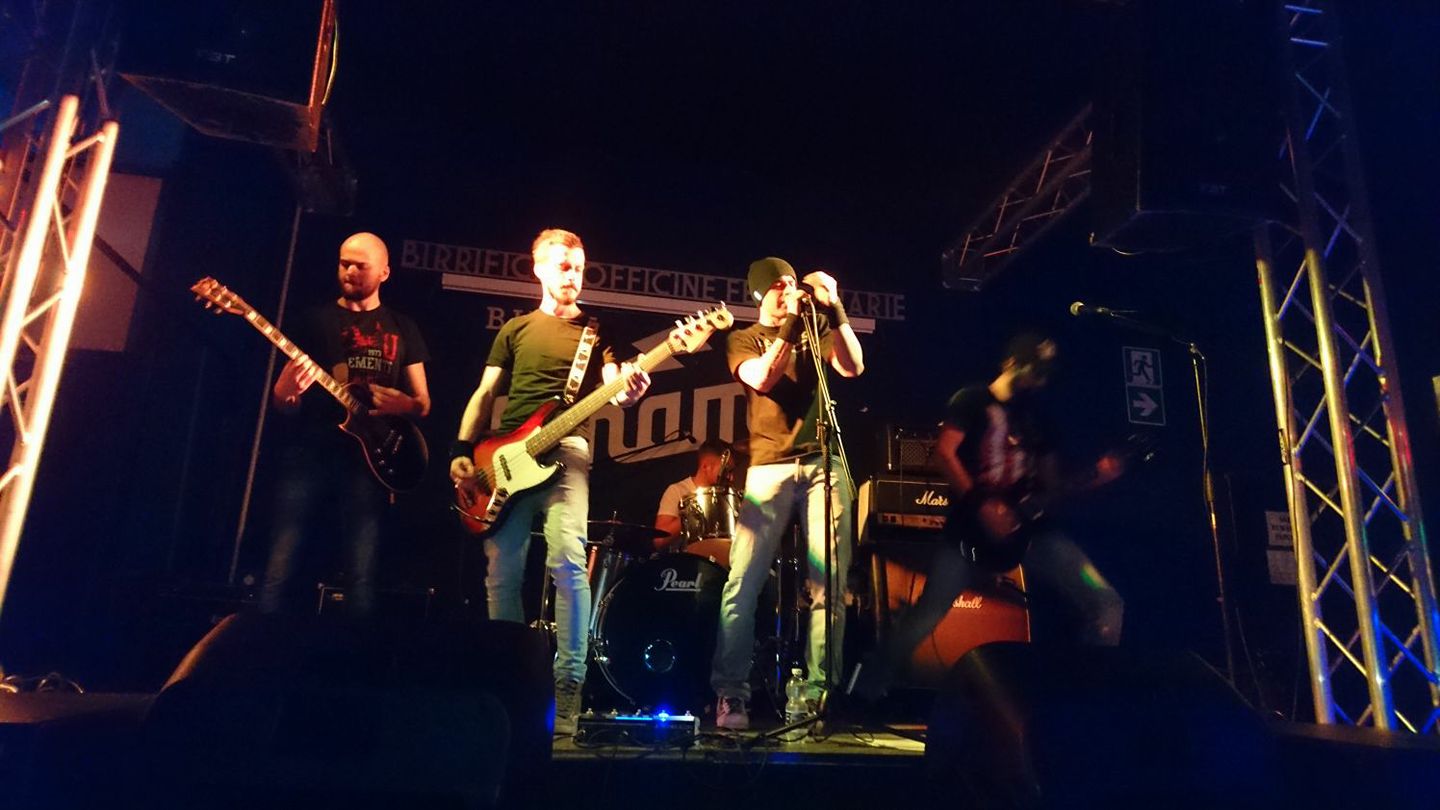 Crossing Belt: Soon after Fabio and Daniele united with Stefano to jam together, we knew something bigger was waiting for us, so we all pursued the dream of having a band. The name of the band was indeed hard to think of, because we didn’t want to settle for something too obvious or cliché – then we found a common joke between the three of us that produced the name, but that’s a secret. Sorry

Crossing Belt: Of course, that’s the base of our relationship. We usually hang out together whenever we have the chance, or sometimes directly after practicing in the studio.

Crossing Belt: I think all of us can agree that performing on stage is the best reward for our efforts in the studio – or even a bad day at work. For us, playing live is really the sum of our ambitions and it takes away any bad mood because you’re doing what you love, and people realize that. Studio work is fine, but in the end it’s just work – if you know what I mean!

Crossing Belt: The message in our music has always been one of great resilience and redemption from situations that can happen in everyone’s lives – we think many people relate to that kind of stuff and we keep being inspired from it.

[Blaster] Is there any funny stories that happened to you while traveling together, that you want to share with our readers?

Crossing Belt: There has been many of them, like when travelling to Germany for our biggest gig to date (1k+ people singing our songs) we were inventing hilarious town names and having the time of our lives while at it. Or that time when travelling to Sardinia to an amazing beachfront concert, our drummer Piero fell asleep while a costume-wearing mascot was around and we sneaked a picture of them both…that’s totally unplanned pure fun.

Crossing Belt: Thank you all for reading this and be safe out there!