Their cinematic lyrics are inspired by beat poetry and the Boston poetry scene, and their unique blend of music incorporates jazz, pop, psychedelia, soul, and prog influences to create forward-thinking alternative rock. We are happy to introduce you to an amazing music band- “Sunset Kings ”

Sunset Kings: STAR: We met in college while playing in different jazz groups. In the summer of 2015, me and the band started recording a bunch of songs I had written. I was making money going to a bunch of shows and open mics, talking to singers and showing them the demos… I started to realize though that people were way more responsive to talk if they saw me perform first, so the band and I started playing shows as The Sunset Kings.

Sunset Kings: STAR: There is no one leader; one of my mentors used to tell me that in a strong team, you can’t tell where one person’s leadership ends and another’s begins. For the music, typically, I’ll start building around a melody and lyrics I have; all the space on my phone is taken up by voice memos. Then I’ll bring the idea to the band and we’ll start building off those first ideas.
NEUMI: It’s a lot of adaptive riffing off of one another. That’s what makes each song unique. It takes a lot of trust in each other but also the stakes make everything that much more real.
Delegation is key, and we’ve been around each other so long that most times it happens naturally without us even verbally communicating it. One minute I’m recording saxophone, I’m feeding off of the hype I’m getting from the band, I’m feeding energy into the band. Then another minute I may be filling in as a producer or engineering the session next. That feeling of someone having your back doesn’t happen in the studio, in the rehearsal space, or even on stage—it happens way before that and caring about other people means doing that work as much as you can off-stage.

Sunset Kings: NEUMI: I’d probably say Acid Rap by Chance the Rapper. It was the first Album Star and I listened to straight through together. I remember being awestruck by how creative and unique all the songs were independently and yet all connected.
STAR: We had spent an entire Saturday morning busking in Harvard Square, made about $400 playing in front of an ice cream shop, and we were sitting down in the living room at our house breaking down this album while counting wadded up dollar bills. What a time.

Sunset Kings: NEUMI: I’m pretty sure no one’s going to find any hidden messages about investing in GME and holding the line if they play the songs backward, especially tracks 6 and 9 on our first album. There is an underlying motivation behind all the songs, though. There are pieces of an overarching story being told across the albums. Each song is an interpretation of real conversations and connections with people in our lives.

Sunset Kings: NEUMI: Always serve the music more than your egos. That’s pretty much it.
STAR: Keep adapting, keep listening, keep making space for more people in your life. Get hungry about experiencing new things. Know that you may feel the same from year to year, but repetition still breeds growth.

Sunset Kings: STAR: I invest a lot of time and energy into exactly what I am doing at any given moment. A lot of times that means letting my phone ring into an abyss because when I’m with you, I’m with you 100%. You never know where inspiration will come from, so you gotta keep your eyes and ears open.
NEUMI: A lot of my horn parts are a mixture of on-the-spot insights and melodies I’ve heard during road trips. Star and I are both very visual people artistically so we watch a lot of movies, a lot of shows, I put them on to a lot of anime. Even that inspires all sorts of conversations that can lead to new songs.

Sunset Kings: STAR: We’re working on an EP for the summer in the midst of us promoting “Shadow Work In Technicolor.” Quarantine was good for me in the sense that it gave me time to experiment and make mistakes, making me real clear and concise about my production skills. It got to the point where I was mixing and producing a new track every week to release on Youtube, and I’m feeling the most creatively free that I’ve ever been.

Sunset Kings: NEUMI: You can see us on YouTube, just look up The Sunset Kings. We’re working on more music videos and filmed performances since we’re still technically in a pandemic. 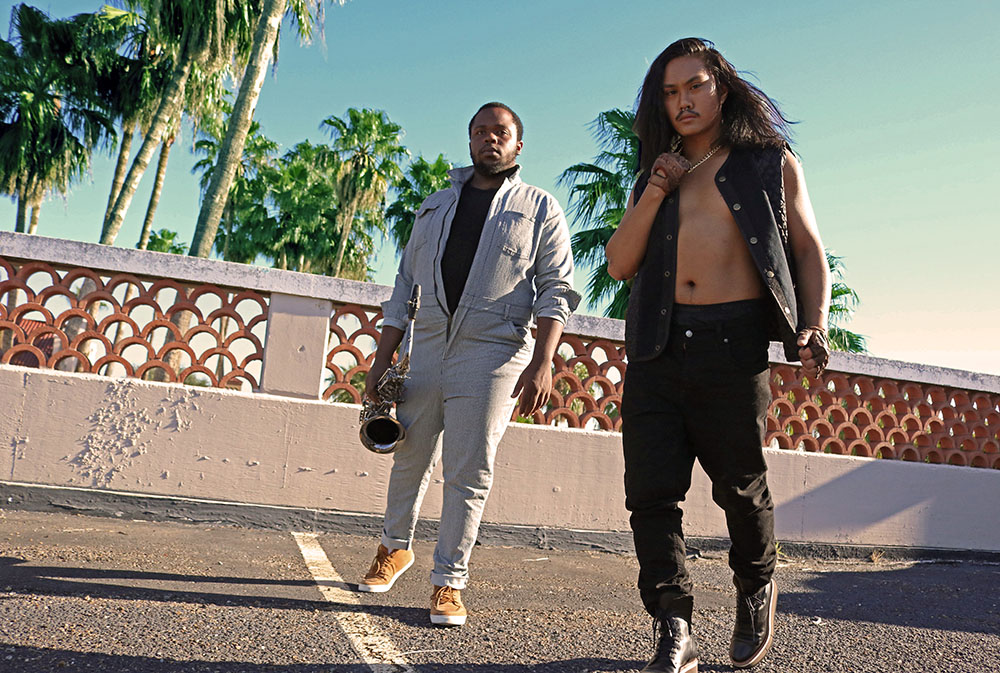 Sunset Kings: STAR: Our mixtape “Shadow Work In Technicolor” was inspired by really tough events. My father got hit with a particularly bad case of coronavirus, and I ended up leaving Boston to help handle things in Texas while he was in the hospital. I thought about what life would be like if he died, because I’m a Scorpio and I hadn’t had a really close relationship with my parents since I left home in high school. That opened up a lot of reflecting for me, particularly about how the band and I grieved the death of our bassist Shag in 2018 [right before the release of The Sunset Kings’ debut album]. Thinking about the brevity of life had me thinking about other things too: how people chose to support me or not during this time, how I may have contributed to those things, and focusing a lot on being easier on myself. All that manifested itself as me recording the mixtape in my parent’s home in Texas, while remotely coordinating getting parts from a bunch of our friends in Boston.

Sunset Kings: NEUMI: To stop apologizing for existing. I’m here, I’m thriving and I’m proud.
STAR: To build an economy around my music. We’re getting to the point where a lot of our friends can’t just hang around on dead time. I’m working super hard now to create a cashflow that can support an environment where our friends and other creatives who we meet can continue learning from each other.

Sunset Kings: NEUMI: The first time we all had a jam session sparked everything, honestly. We had great chemistry so we went with it. The name was actually the easiest part.
STAR: For me it was a show we played at this now-defunct but still legendary artist space in Cambridge, right between MIT and Harvard Square. It’s called East Meets Words. I went to shows there before I ever thought I’d start playing music again, and when I was on that stage with my band, I remember moving with this clarity I had never felt before. I felt inspiring, seen, and connected to all these people sharing that moment with me in the audience.

Sunset Kings: NEUMI: Oh absolutely, Star and I found time to hang out all the time outside of shows and rehearsal, and we still do. We know each other’s families and they’ve been there for me through a lot of my lowest points. One of the strangest things about 2020 was that we lived in different states. We’re so used to being around each other all the time. While recording together, I actually flew down to Texas and stayed with Allister. We found an old Nintendo 64, hooked it up to one of those boxy tv’s that weigh a ton, and played a lot of Mario Kart. Talked a lot of trash. That’s actually where all the lyrics come from.

Sunset Kings: NEUMI: I’m happiest in a space that has a balance of creativity and challenge. As long as I’m growing and pushing, a lot of different situations make me happy.
STAR: For me, it’s definitely the kickback right after performing.

Sunset Kings: NEUMI: I hope that people see that real life isn’t as pretty as the movies. There are ugly sides and shadows but that’s what makes it all the more amazing. You won’t always be the winner and sometimes you are the villain. Just remember that doesn’t mean that things can’t change; you’re the one writing your story.
STAR: Real life isn’t as pretty as the movies, but it’s just as much worth experiencing once you make a conscious choice to participate. More than anything, I hope the songs have a chance of finding people at the right time that they need it.

Sunset Kings: NEUMI: I mean, honestly, there’s so many. Star and I have clocked in hours of driving together. There’s the time we went to a blues bar in Chicago or the time we played on the Old Vegas Strip. I think what I’d rather share is how much music we’ve connected over while driving. We collect playlists and albums to show each other once we’re locked in a car together for hours, and we call it our Hyperbolic Time Chamber. One time, we played 2014 Forest Hills Drive on repeat until we learned every single adlib. Then we didn’t play it again for the rest of the trip, but one of us would just yell out a Cole adlib to cut through the repetition of the road.

Sunset Kings: STAR: We appreciate you sticking with us up until now. We know there’s been a lot of changes but sometimes self-care requires you to identify when you are impeding other people’s growth. Your happiness shouldn’t be the expense you pay for someone else’s healing.